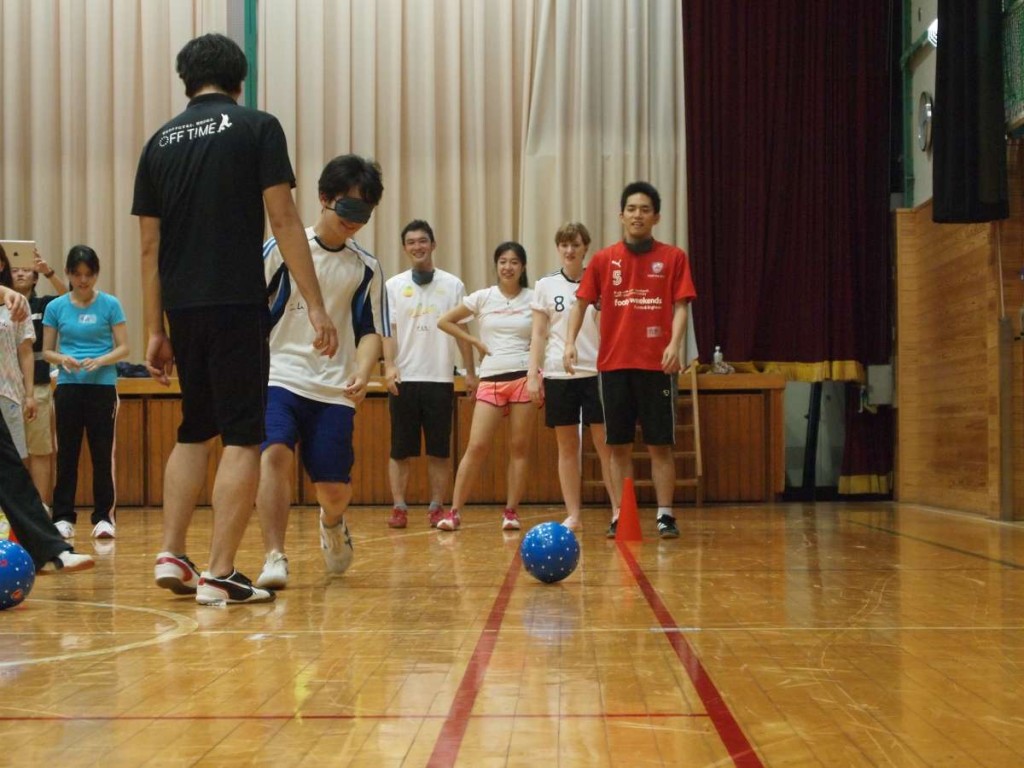 Listening with your forehead

Listening with your forehead

Could you play football blindfolded?

Having kicked off our ‘Kick-about together’ project, we thought it was about time that we actually experienced blind football for ourselves. We were pretty curious already as to what it would be like to try playing the beautiful game with our eyes shut, plunging ourselves into pitch black darkness and finding the limits of how far our other senses would carry us. It was just as we were pondering these things that a very kind invitation from the Japanese Blind Football Association came along to try their workshop 'OFF T!ME'.

We tried to imagine what it was going to be like. The first thing that sprang to mind that might vaguely resemble what we were about to experience, were those games you play as a child that involve trying to hit or aim at something whilst wearing a blindfold. Something like that Japanese game of trying to smash open a watermelon with a stick, or ‘pin the tail on the donkey’. Someone pops a blindfold on and listens out for the directions by a caller giving directions on which way to swing the bat or whether the tail needs to go a little higher or lower.
Of course, when you actually put the blindfold on and try, it’s a whole different ball game. 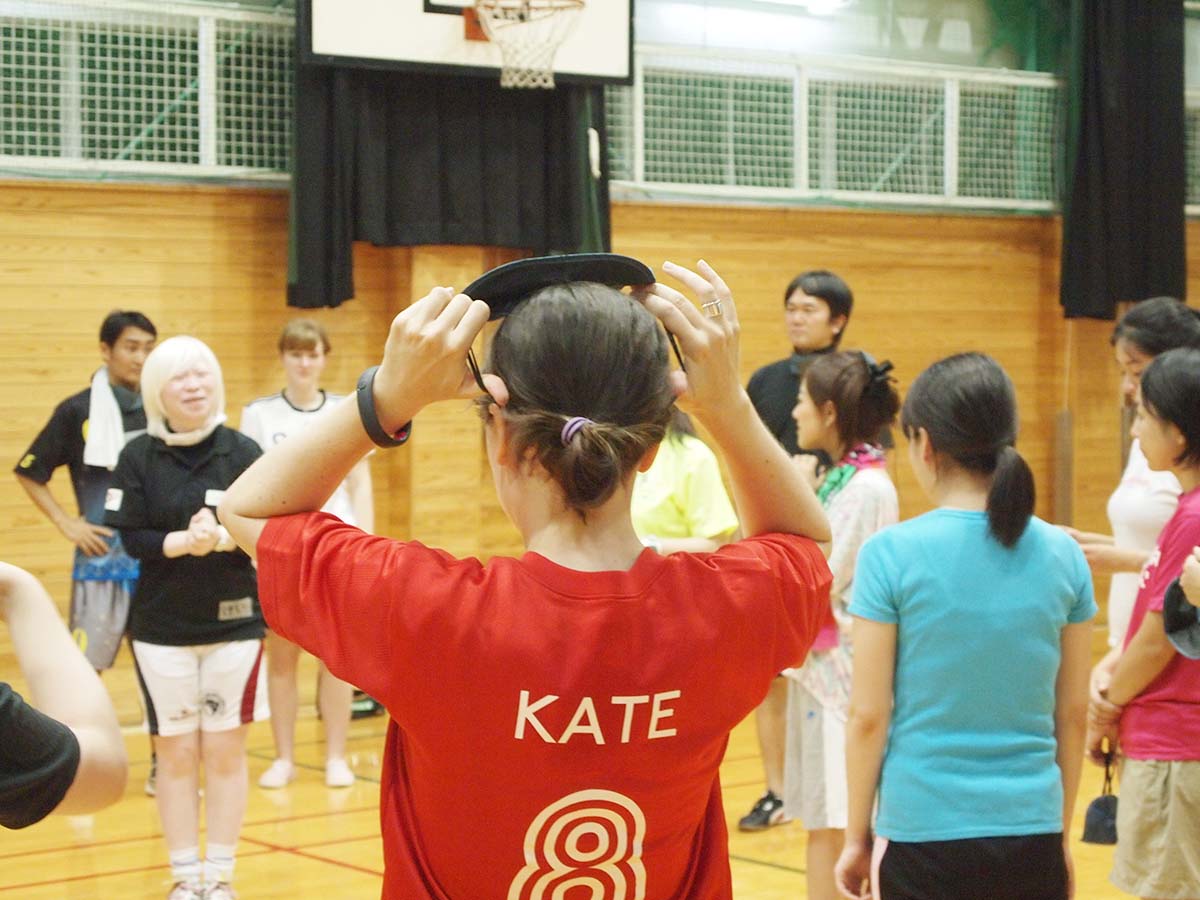 Actually, as it turned out, I was the photographer for the event. It wouldn't have been safe for me to dive in and out of temporary blindness, so I took a back seat with the camera. Whilst I may not have experienced it first hand, by watching the other people who did take part, I was able to witness how the second they put on their blindfolds, everyone was put on an equal footing, no matter their age, sex or build. Their visual world was shut off from them, and even from the sidelines, I could clearly see how lost they felt as they began to rely on their other senses. 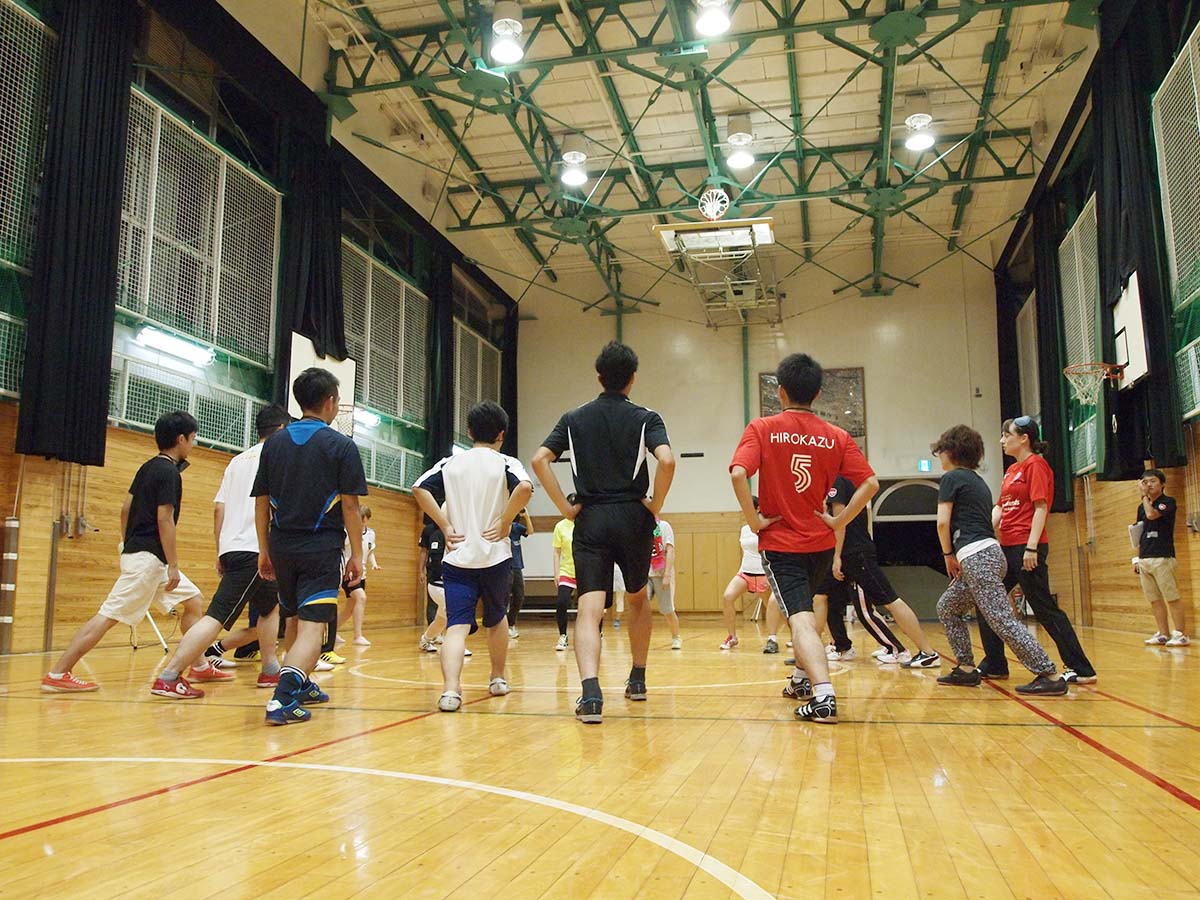 The workshop that day consisted of nine activities. Firstly, there were warming up stretches, which cleverly doubled as a way to introduce the importance of clear communication where no assumptions of the other person's knowledge could be taken for granted. Newly acquainted people were swiftly put into pairs where one person wore the blindfold, and the other acted as their eyes. 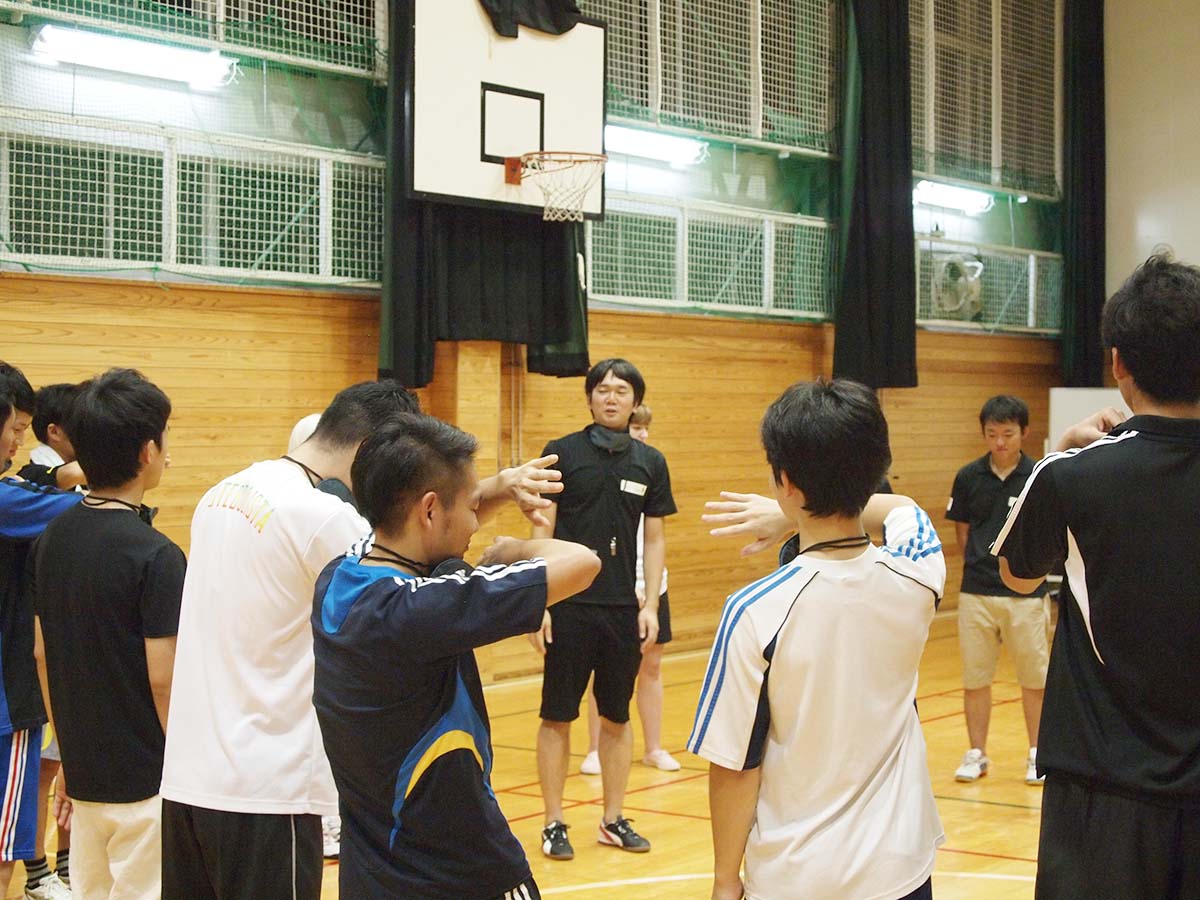 Their job was to communicate to their blindfolded partner what type of stretch the facilitator was doing, and give them enough information to be able to do the same. The key learning points here were having to think about giving an adequate amount of information clearly, but also telling the blindfolded person that they could stop doing star jumps and take a rest. This taught us the importance of noticing more carefully what type of information people need and when. Secondly, everyone was taught how to walk around with their right arm held out bent, level with their chin, as this would not only reassure them once they began to move around blindfolded, but also should a collision occur, holding their arm in that position would not harm the other person. This was to highlight how important it is to consider other people's needs to feel secure too. 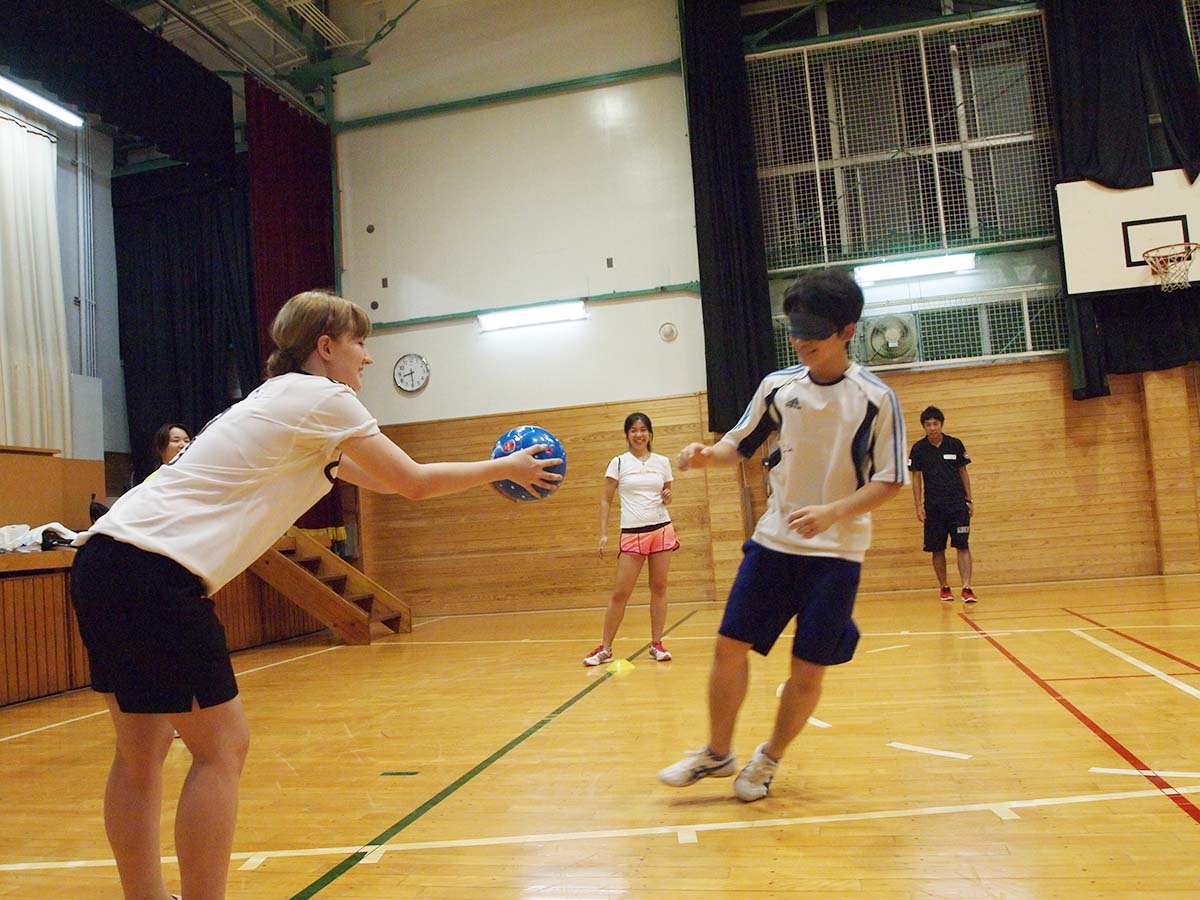 Once people began to feel comfortable with moving around blindfolded, they were challenged
to make groups with people wearing the same coloured shoes or t-shirts. They had to call out to others and then locate their team mates in the dark. I began to realise that this workshop was not about being blindfolded and then suddenly learning to kick a ball about, or trying to pick up extra footballing skills. A substantial amount of time in this workshop was dedicated to highlighting the foundational skill of blind football - effective and considerate communication. Before you even touch a ball, it is essential to grasp the need to use your voice to relay information to those around you, connecting with those that you share the playing area with. And it was from this path of progression towards touching the ball that in only a two hour session, people who had never met before became real team mates. How this workshop closed the gap between people left the biggest impression on me.

One thing that remained consistent throughout the workshop was how the facilitators used activities to show that the key skills of blind football are relevant off the pitch, visual impairment or not. In the second half of the workshop, there was a team battle where four people stood in a square, about 2 metres from one another, and in the centre their team mate stood wearing a blindfold. The challenge was to pass a ball around (the ball used in blind football that contains small bells and makes a noise) between the four team mates in the square, and to communicate to the team mate in the middle where the ball was so they could tap it. The aim being to see which team could communicate the most effectively to get the highest number of taps within one minute.

A very simple, but deep meaning game. The only rule the facilitator insisted on was that teams could not simply decide an anti-clockwise or clockwise passing system, as then communication was no longer a necessity for success. The point was that through good communication and calling out to the blindfolded person in the centre, this was how you would be successful. As an observer, I saw that as the workshop progressed, the game feeling increased, each team became more competitive, each person became more confident without their sight, and were learning different ways to communicate and adapting more and more how they reached out to those around them. By speaking out to people close to you and trusting that you will be safe in their hands, this relationship will bring reassurance and guidance, making you feel safe and confident to move.

Within a short time, the workshop participants had judged for themselves that they could
trust these new team mates and rely on them for their own safety, and crucially that this was essential for individual and team success. The person in the centre who was taking the risk to run after and tap the ball at speed. The team mates in the square managing the time limit and space confinements of the square whilst communicating all the essential points with maximum information, AND reassuring the team mate in the centre enough to move and tap confidently and at a fast enough pace to increase the team’s score. All of these were great achievements, and things that are applicable in the workplace or at home. This workshop taught the participants the importance of putting yourself in the other person’s shoes.

Probably the activity that really struck me, was watching the participants when they finally got to kick the ball in a drill that involved one team mate who was blindfolded receiving a pass from their team mate and then having to pass it back to them. This sounds like a very simple drill no doubt.

It was chaos. Directions being shouted out and coming from all directions and different teams. I could feel the confusion and frustration the blind folded player must have felt trying to locate a ball that they couldn’t see. The blindfolded players were wandering around tapping their foot out trying to find the ball whilst trying not to fall over, desperately trying to pick up the sound of the ball. It was during the height of this chaos that the facilitator paused the action to give some more advice.

“Listen with your forehead”. Of course to those of us without any visual impairments, this will probably make no sense in the slightest. But if you think about what it would be like to be without your sight, you can probably grasp how adapting your other senses is key. Instead of tilting one ear to where you think the ball should be, try to keep your face head on to where you think you can hear the ball, which will help you to keep a better track of where you are and where you need to go. The message being, be more flexible about how you use your senses, even if trying to 'listen' with your forehead sounds a bit odd at first. 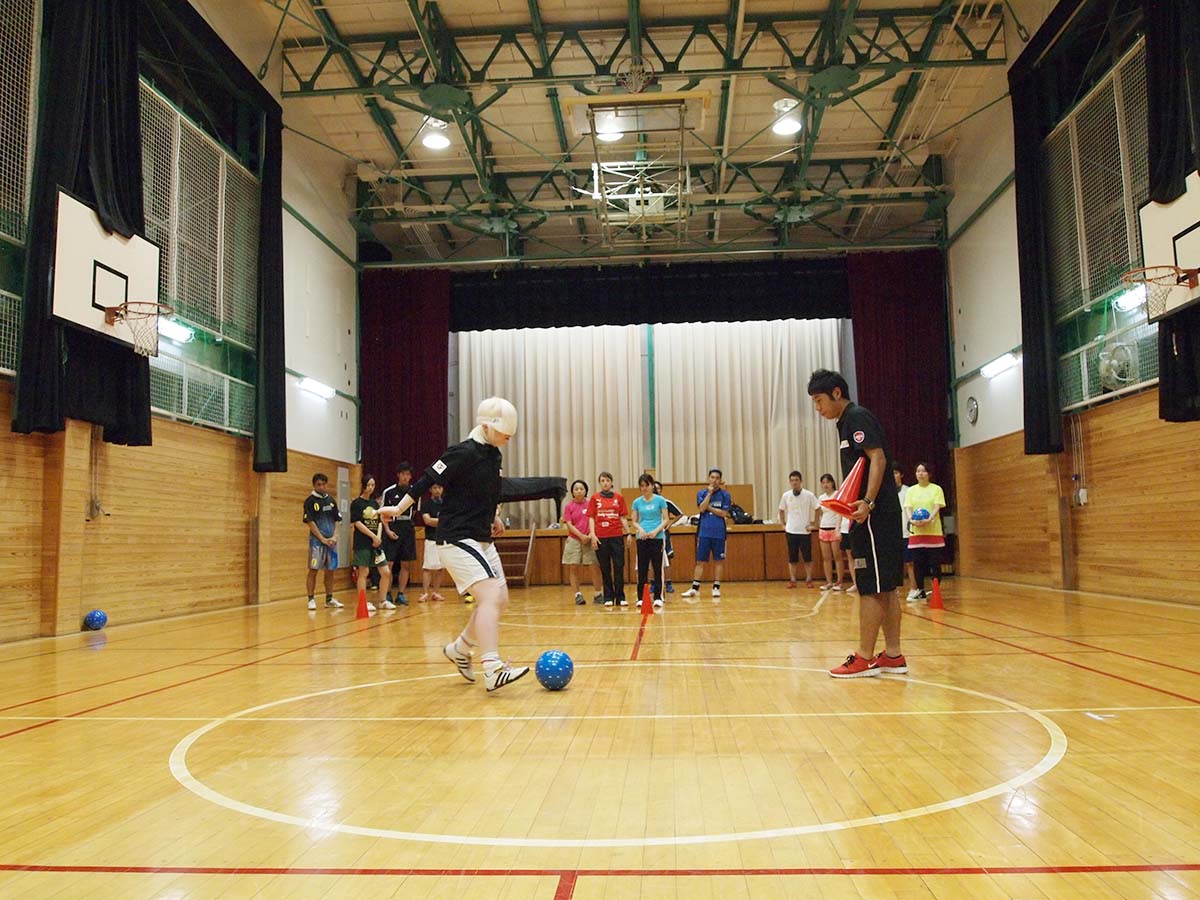 After the workshop, I spoke to one of the participants, a man in his early thirties who has been playing football since he was six. Having asked him what he thought about the workshop, he replied that “I could share the fear (of being without sight) with my team mates” and that “through trusting those around me, I improved.”

In this experiential workshop, the moment that the normal things that you take for granted are taken away, you become more adaptable in your thinking, and the huge importance of not breaking the line of communication with others becomes clear. There are likely to be people that feel that this is difficult for them, even in this world where we are surrounded by more and more advanced tools of communication. I think however that if those people go out and try this workshop that explores physical reality and tests our senses and communicative skills in such a relevant and thought provoking method, the points essential for living in a community will surely become a natural habit for anyone. 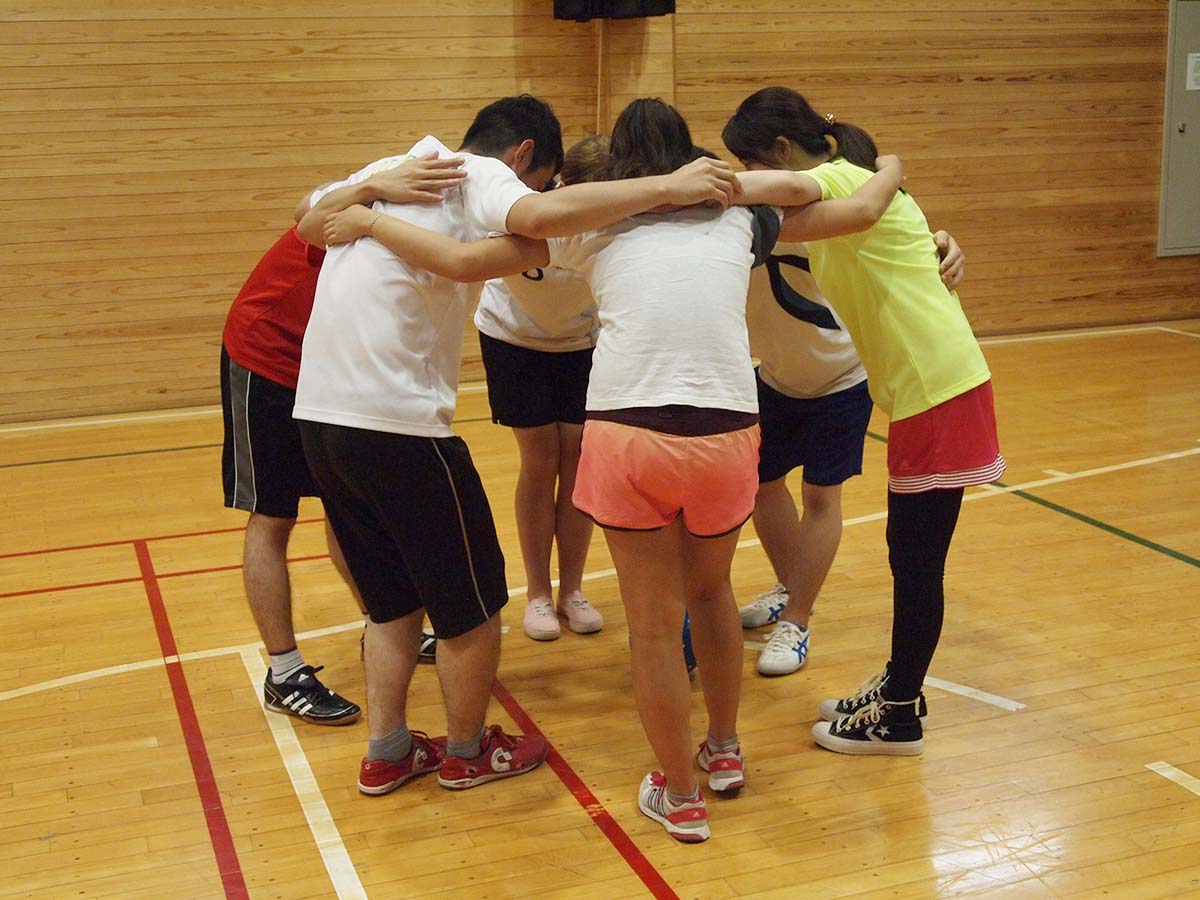